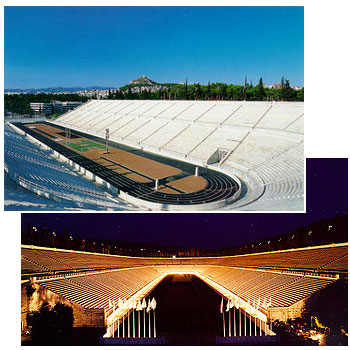 There is no other city in the world that can offer such an ancient, beautiful and striking Olympic stadium like the Kalimarmaro.

The first modern Olympics took place here in 1896 and in this very same place the ancient Panathinae, which were one of the first sports events in history, used to take place more than 3000 years ago!!!

This stadium is impressive both for its history and for its U- shape which seats more than 70,000 spectators on a surface completely covered in Pendelis white marble, the same used to build the Parthenon. So whether you are part of the audience or an athlete, the feeling you get when entering the stadium is unique and unequalled just like the Olympic games, which are finally returning to the place where they originated.