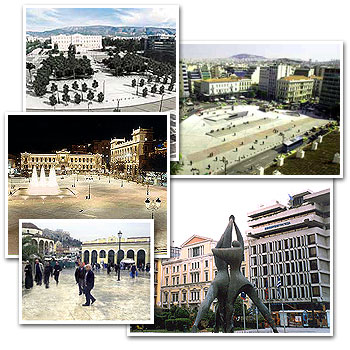 When in the 19th century King Otto I of Greece called the great European architects to design the urban plan of Athens, many ambitious projects were presented. They all had one highly fashionable feature in common which was their orthogonal structure of wide avenues leading to large squares and following a precise pattern of straight lines. This was the style of the time and this was the imprint given to the city.

As you can see on a map of the historical centre of Athens, the most important city squares are connected by wide avenues forming an equilateral triangle divided by two internal right triangles. At the end of the 90-degree triangle on the right, also called the business triangle because of the many companies there, there are the main city squares, Sidagma, Omonia and Monastiraki. The other three large squares of the historical centre, Klathmonos, Kotzia e Kumunduru are situated on the two internal sides of the big equilateral triangle, so that the two sides mirror each other. On the internal side shared by the two right triangles, there is Platia Kotzia, which was built following the demolition of the communal theatre, an important historical building of the 800s.

The most significant squares from an artistic point of view are definitely Platia Sidagma, dominated by the former royal palace, a stately building that is now the seat of Parliament; Platia Kotzia with 3 lovely neoclassical buildings, the old town hall, the national bank and the post office. Lastly there's piazza Monastiraki, with views of the Acropolis, the splendid Byzantine church, the ancient neoclassical underground station and the former mosque, one of the legacies of the secular Ottoman rule.