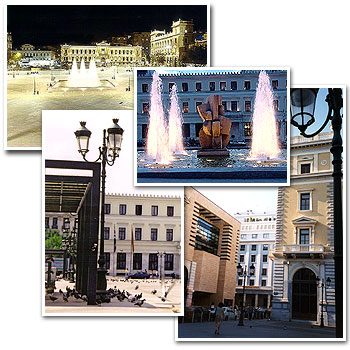 It's the least known of the squares referred to so far. It is an elegant square a stone's throw from Platia Omonoia and is surrounded by lovely neoclassical buildings among which the old town hall. There is also a small archaeological site (where you can see the city's water supply system dating back to 2000 years ago) which has been recently brought to light following the excavations for the underground car park.

On the opposite side of the Town Hall, there's the National Bank of Greece, situated in a beautiful neoclassical building. Next to it, still belonging to the bank, is a very modern building designed by the famous architect Mario Botta. It's an outstanding example of modern architecture and in the hall under a glass floor, you can see the remains of the old city walls. Skirting the square and the above buildings is odos Eolou Street, in the middle of which there are some glass pyramids that house further archaeological finds.