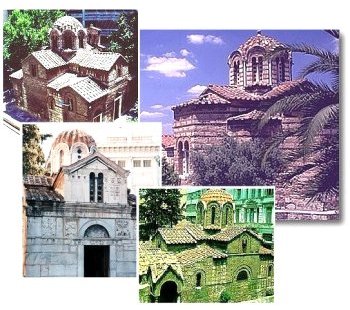 Byzantine Athens (330-1454 A.D.) was very different from the one of the classical, Hellenistic or Roman periods. Having been repeatedly sacked and rampaged and occupied, it became a small village on the borders of the vast Byzantine Empire. The village was typically Medieval with narrow streets following the route of the wider Roman ones, and the architecture of the houses similar to ancient times with the rooms looking out onto a central courtyard without a peristyle.

Little remains of the private buildings of this period, especially due to the continual ransacking of the city d uring the following centuries. However the tiny Byzantine churches built between the 10th and the 11th centuries still remain and can be accessed in the ancient quarters.

INTERACTIVE MAP OF THE ATHENS BYZANTINE CHURCHES
This exclusive map is offered to you by www.athens-today.com