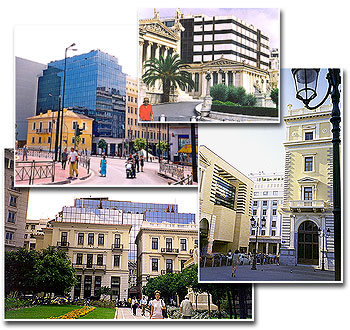 The New Area of Historical Centre

The area is situated in the north east of the Acropolis and the ancient quarters. It was purposely planned by great European architects to give a new dimension to the city, following its liberation from the Ottoman Empire, under which it had been made into a small provincial village for many years.

King Otto I decided to get together the most important architects of the period, in order to study the layout of the city and to transform it into a European capital. Many projects were put forward, some of them were very extravagant, but in the end realism prevailed. The area was immediately redeveloped and in a short time it acquired the monumental, orthogonal and neoclassical look that was so fashionable at the time. Gradually Government buildings in the neoclassical style, hotels, private houses and straight, wide avenues were built.

Since then, the area has been the institutional, commercial and operative centre of the city. Nowadays it houses banks, government offices, shops, galleries and theatres. For these reasons Athens differs greatly from other European historical centres. During 150 years of urbanisation, the dynamic aspect of its architecture has created evocative contrasts between the neoclassical buildings and the modern ones. The meshing of many styles and periods is the result of the city's need to constantly re-create itself and to develop, like a constant metamorphosis, as if it were afraid of straying from its immortal core.

The 'new area' is changing year after year and yet manages to keep its best samples of past architecture allowing us in the space of a kilometre to observe a variety of styles from the last century and a half of history. 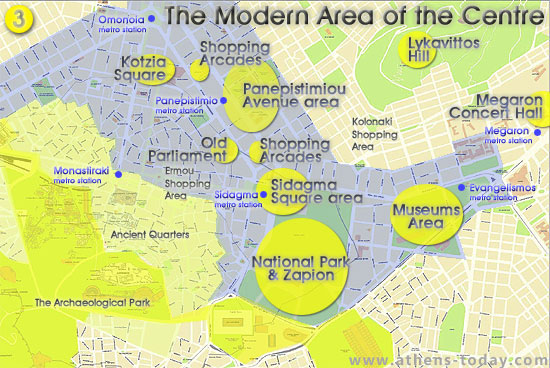