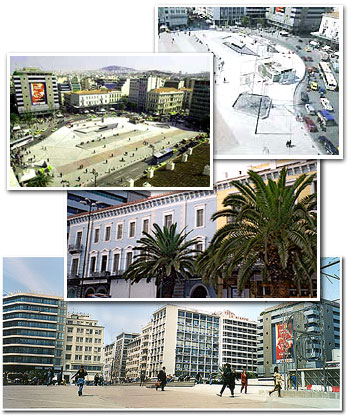 Omonia square is the cardinal centre of the city as well as a transit point. It has undergone the most radical architectural and urban plan change in Athens during its last century of history. The square is always changing, it seems as if it were always searching for its true identity, without finding a fully satisfying image.

It is a place where nothing stays the same, where everything changes and passes through. This can be said both of its shape, having first been square, then circular and lastly semi-circular and of its style, at first neoclassical, made up of open air cafés and small villas, then modern and very minimalist surrounded by tall buildings.

Nowadays the square has a double image. In the morning it is full of the hustle and bustle of Athenians doing their shopping, while in the evening it is a meeting point for the immigrants. In just a few years, thanks to its lifestyle and the many job offers, Athens has become a point of attraction for thousands of immigrants, mainly from the Balkans, Turkey and the Middle East. They have settled in the areas around Omonoia Square especially in Metaxurghio and Gazi, the old industrial part of the city as they are close to the centre and rent is low. Consequently these areas have become real Albanian, Turkish, Rumanian and Chinese communities. This, however, has affected the quarter which is no longer patronized by the Athenians who have moved to the more elegant and fashionable area around Sidagma square.