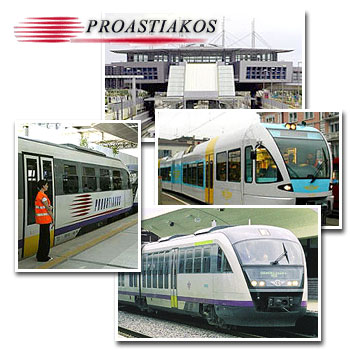 With the opening of the Athenian suburban line in spring 2004, the majority of satellite towns in the capital have been joined to the vast fabric of the city. Thanks to super fast links guaranteed by the ultramodern trains, the vast distances in the large Athenian region seem to have cancelled themselves out.

Now that journeys take less time the inhabitants of the various residential areas can easily reach the industrial part, the city centre, the port, the airport and the beaches. They can also afford to leave their cars at home consequently reducing the air pollution, which has been a problem for about 20 years.

On the other hand it's easy to foresee the sudden, irreversible decentralisation and spreading ut of the city. If it increases at the same current rate, the city will soon be occupying 4000 square kilometres of the entire regional area.

The Proastiakos is composed of two main lines:

The junction of the two lines is SKA station (the Railway centre of Aharnon) situated in the quarter of Aharnon close to the northern ring-road (Attikì Odos), 15 km from the city centre.

The Athenian suburban line can take high speed trains of up to 160 km/h and is perfectly integrated with the remaining metropolitan network, that is the excellent underground and the super modern tram.