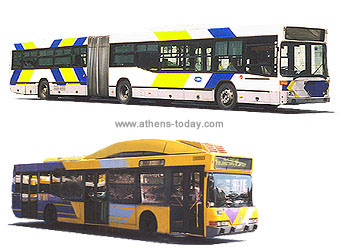 Athens has one of the most modern European bus networks, 92% of all the vehicles have been recently built and many of them are environmentally friendly (Methane, CNG and Euro3,4,5).

DAthens there are 416 buses which run on natural gas for which the city holds the European record. 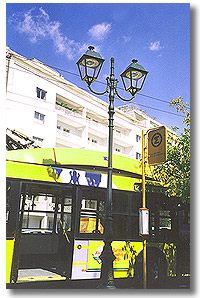 Some of the most prominent features of the Athenian transport network are based on the latest telecommunication systems and it has 300 intelligent bus stops equipped with screens and audio announcements to inform users about buses and timetables. The buses can also communicate with the traffic lights regulating them so as to quicken the journey, they can signal their position to the control centre and the number of passengers they are carrying, with a G.P.S. system. There is another highly innovative system which allows the monitoring of traffic and even the amount of people using the public transport, in order to increase the number of bus runs if necessary. 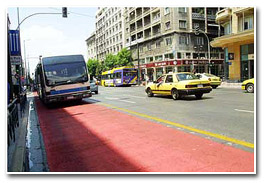 The bus and trolley-bus network has many kilometres of preferential lanes distinguishable by the green tarmac (or red if the traffic direction is opposite to the other cars) so they stand out and drivers are discouraged from committing traffic offences. Dozens of cameras are constantly monitoring the roads and heavy fines are sent to the unruly drivers.

Athenians also love travelling by taxi, there are tens of thousands in the city and they are adapting to the high technological level of public transport with satellite navigation systems integrated to internet, which allow passengers to surf the net and even to shop on-line during the ride!!!!